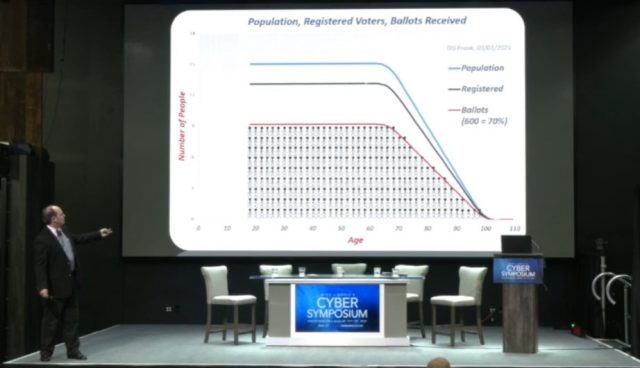 Mike Lindell held his election fraud Cyber Symposium today.  During the event, he repeatedly teased that he would be releasing Earth shattering information at 7 PM CST.  When the time came, there was a delay, but eventually he brought out the County Clerk for Mesa Colorado, Tina Peters.  Peters is a conservative in a red county.  Peters went on to say she had issues with the election in her county and that she, “could not un-see what she has seen.”  And that she had begun her own investigation into election fraud within her county.

We’ll get back to Peters in a minute.

Earlier in the day, Lindell had Dr. Douglas G. Frank give a presentation on his findings of algorithmic abnormalities in the election data that indicate massive widespread fraud occurred. You can watch his presentation here.  I found it to be extremely compelling. I give a brief summary of his lecture here.

During Frank’s lecture, he teases that they have several counties where County Clerks gave them access to the machines and routers to preform complete audits – before, during and after the 2020 election took place. “You think Maricopa is an audit… How would you like to do an audit where you have access to everything and no one knows.  We take images of all the machines, of all the digital software that are in them, of all the routers, of everything, before, during and after the election.  We record the activity during the election.  All of that.  At the request of the County people.  We have those.”

He goes on to say, “By the way, if someone knew that we had a complete recording of their election and was going to expose a bunch of officials, what do you think might happen?  Maybe we might have a few people that might want to come forward…”

So back to Peters.

When it came time for Peters to speak, we really didn’t learn much.  The explosive revelation that was supposed to occur didn’t occur.  Lindell said it was being pushed back to Thursday.

On August 3rd, The Gateway Pundit reported that BIOS passwords and manuals for Dominion machines belonging to an unnamed county had just been leaked by a whistleblower. The manuals showed the machines were able to connect to the internet.

Yesterday, The Denver Post published a story saying Colorado Secretary of State Jena Griswold (who was funded by Soros and is a virulent communist) just launched an investigation into Peters office’s potential role in that very same leak.  The SoS knew the leak involved Mesa Colorado because the SoS knew the leaked passwords matched those for the Mesa machines. 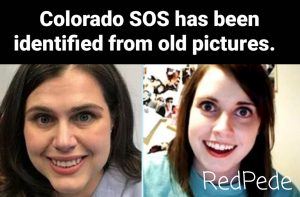 Just before Peters took the stage at the symposium, Griswold, along with Dominion employees, raided Peters’ offices and went into the election equipment room for several hours.  Peters’ staff was not allowed to observe what they were doing in there.

The Daily Sentinel, a Colorado based news site, did a story on this raid – but pay very close attention to how the story is worded:

Mesa County Clerk Tina Peters is under investigation for a breach in election security that could lead to criminal charges, the Colorado Secretary of State’s Office announced Monday.

Secretary of State Jena Griswold issued a direct order to Peters early Monday demanding that she disclose surveillance recordings and other documents related to the illegal release of passwords to Mesa County election computers, including detailed information for an unknown employee who may or may not work for her who Peters allowed to have access to sensitive election information…

He [the leaker] said it was proof that the nation’s election systems could be accessed outside of elections offices, and that employees within the Colorado-based Dominion company had remote access to them.

She said only “very trusted” election workers are given access to the passwords.

During her talk at the Symposium, Peters made it clear that she had nothing to do with the leak and that she didn’t know or control the passwords to the machines.  Peters said only the SoS’s office knew the passwords, so the leak had to come from them.

So just to be clear, we have the communist Griswold accusing Peters of leaking information only Griswold could have known, and then raiding Peters election equipment offices while Peters is away at a symposium on election rigging.

Now for my speculations.

I think the white hat hackers at the symposium had setup a situation where they were going to conduct a live hacking of the Mesa County election system, and that was going to be the Earth shattering event Lindell was promoting.

I think the NSA (or pick one of the other dozen corrupt intel agencies) was monitoring Lindell’s communications and found out what they were up to.  They then must have alerted the communist Griswold, telling her that she needed to find an excuse to raid the Mesa election offices so they could yank the modems out of the machines.

Griswold (or the leaker under the direction of the NSA) intentionally leaked the passwords and manuals, providing them a convenient excuse to raid the Mesa offices.

The communist Griswold had to wait until the moment of the Symposium to do this because early action might have given the white hats time to redeploy to a different county or make other counter moves prior to the promoted event.