My fat ass a bomb in an RV did this. 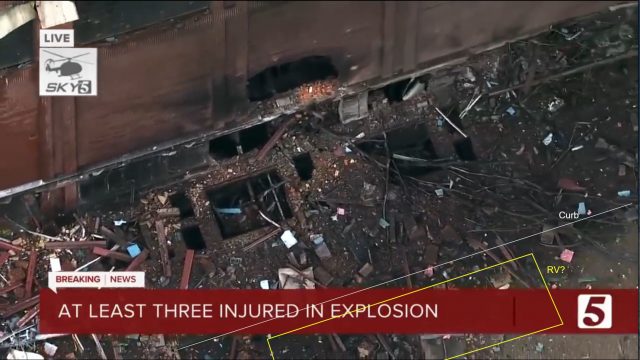 From a news helicopter flyover of the bomb site, we can determine some interesting facts: 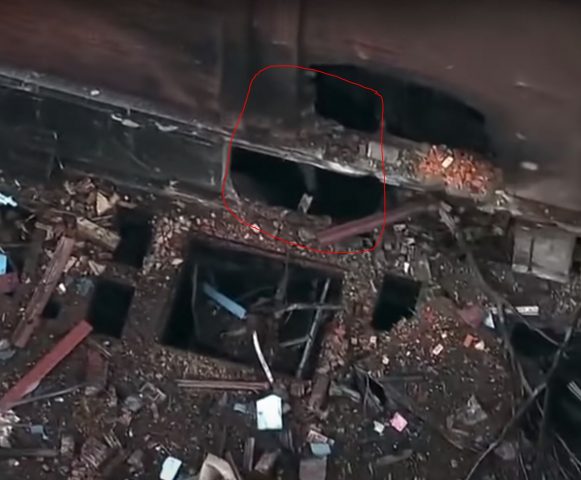 You can see the full overhead video here. In the video below, you can see something create a streak of smoke in the sky into/from the building one second before it explodes. The black and white video is contraindicated by this video, which does not show any streak in the sky before the explosion.  I’m not sure what the cause of this streak is.  It’s possible the black and white video may be capturing more of the infrared spectrum, which is why it’s showing up in one video but not the other. 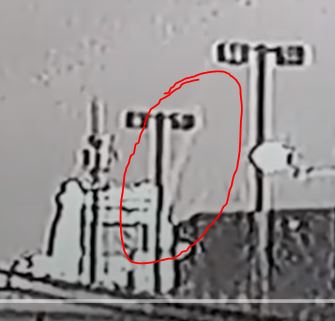 Here is a street level view of the explosion.  In this recently released high definition security camera, we can make out that an RV is parked in front of the white SUV on the left side of the street, adjacent to where the blast holes in the ATT building are located.

The RV was parked between these two sets of cars and its wreckage is not identifiable. 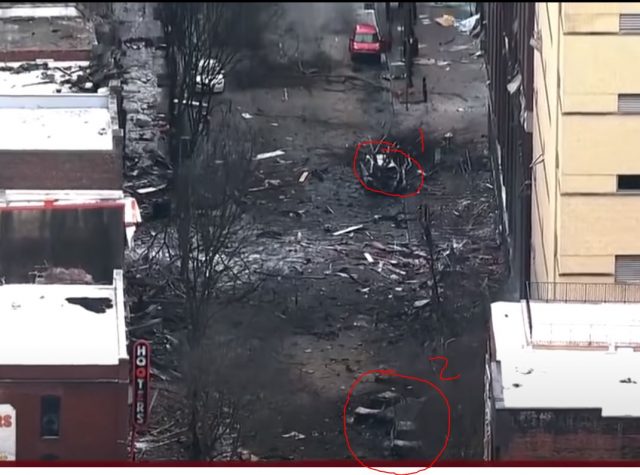 It’s also worth noting that this “AT&T” building is entirely concrete with no windows and has huge roof-top ventilation systems designed to support a massive server farm.  This is exactly the same kind of construction we see with known NSA data centers. Notice the lack of damage to the ATT building facade compared to the buildings across the street.  The ATT building was reinforced; which again is something we would expect to see from a centrally located NSA data center. My speculations: The RV may have been blown completely across the street into the 176 2nd street building, which is why we aren’t seeing any wreckage of it in the street.

To me, it seems obvious that the blast came from inside the ATT building itself. This was obviously not an attack carried out by some lone suicidal nut who hated 5G networks.  This was a state level attack carried out with professional precision in such a way as to minimize surrounding collateral damage and loss of life while simultaneously wiping out an (NSA? CIA?) data center.

Officially, we are supposed to believe some 63 year old dude rigged up an RV with a bomb that utilized a sophisticated automated countdown and PA warning system with an expert level of explosives engineering, completely destroying the sub-floors of the ATT building while leaving no crater in the road, perfectly taking out the communications servers with minimal collateral damage, while completely vaporizing the RV into oblivion.

And for the pièce de résistance, “authorities” are now saying the bomber died in the blast – because of course he did. I mean, who doesn’t hate 5G providers so much they want to commit suicide in an act of martyrdom against 5G providers, while having no social media history of long standing protest against 5G providers?  And of course, the FBI is triumphantly declaring no other individuals were involved.

Nothing to see here folks. Move along.

So news is coming out that a Nashville attorney, named Raymond Throckmorton III, placed a 911 call back in August of 2019 about a client of his who knew Anthony Warner (the suspected bomber).  During the call he tells the 911 operator that his client, Pamela Perry, was suicidal and that she claimed to know a man who was building bombs in his home.  The whole call is strange.

The phone call to 911 sounds contrived if you listen to it.  The first thing Throckmorton does on the call is announce his full name and mentions the fact he’s been an attorney in Nashville for 30 years – strange way to start an emergency call, but I digress.

Throckmorton then goes on to say Perry is sitting on her porch with guns threatening to kill herself, and that he wants a police officer to meet him down the road so they can walk up to Perry on foot without sirens going off – again, how many attorneys do you know that would meet the police at a suicidal armed client’s house and try to talk to them in person?

When asked by the dispatcher if he knew why Perry was so upset, Throckmorton said he didn’t know and that’s all he could say. So Perry thought so highly of her attorney that she called him for help during a suicidal episode, but didn’t tell him the reason why she’s so upset…

In a Nashville.gov press release, it becomes clear that Warner is actually a client of Throckmorton’s; and that the suicidal woman, Pamela Perry, has big enough psychiatric issues that she required an ambulance ride to a psych hospital! When police tried to investigate Throckmorton’s claims of Warner building bombs, “Throckmorton would not allow his client [Warner] to permit a visual inspection of the RV.” – yeah read all that twice because it’s all a big pile of crazy.

Throckmorton doesn’t come up in any kind of public law firm search listing. His business address is listed at 2016 8th Ave S Nashville, TN. I couldn’t find any business website or social media accounts associated with him or his firm. There’s a broken Wix website for a company called R3T Consulting Group, that has an attorney named “Ray Throckmorton” who is peddling himself as an expert witness with familiarity in royalty audits in China and Asian licensing compliance.  There are only a handful of reviews for him, and all of those are by anonymous reviewers who simply left a star rating.  The last review for him was posted back in 2010 by an anonymous partner.

If you are linking or sharing this article, please do so from this WordPress hosted site to help out with bandwidth issues.