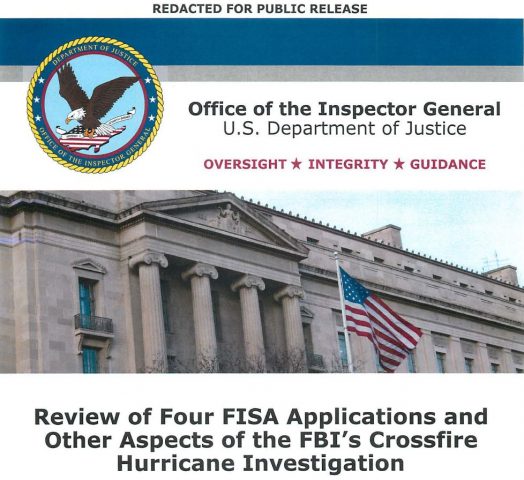 IG’s whitewash report on FBI spying against Trump has been released.  Here’s the entirety of evidence the FBI used to justify opening a comprehensive spying operation against the Trump campaign:

…the FBI opened Crossfire Hurricane on July 31, 2016, just days after its receipt of information from a Friendly Foreign Government (FFG) reporting that, in May 2016, during a meeting with the FFG, then Trump campaign foreign policy advisor George Papadopoulos “suggested the Trump team had received some kind of suggestion from Russia that it could assist this process with the anonymous release of information during the campaign that would be damaging to Mrs. Clinton (and President Obama).” The FBI Electronic Communication (EC) opening the Crossfire Hurricane investigation stated that, based on the FFG information, “this investigation is being opened to determine whether individual(s) associated with the Trump campaign are witting of and/or coordinating activities with the Government of Russia.”

They didn’t contact Papadopoulos to find out if this actually happened or not. They didn’t contact the Trump campaign to alert them about this issue.  They didn’t try to confirm the information first.  No.  They decided the best course of action was to open up an unprecedented spying operation on a presidential campaign based on the hearsay testimony of a foreign government agent who overheard Papadopoulos saying “suggestions” of “some kind” may have been received from Russia.

The report ignores the fact that the FBI was meeting with Steele in early July, before the case started, in London, while the UK was passing information to the Obama administration about Trump.  The whitewash report must ignore this fact, because if they acknowledged it, it would mean that the case was not predicated on the hearsay of an foreign agent, but rather on the claims of a unverified political opposition research paper paid for by the DNC.

Although not mentioned in the EC, at the time, FBI officials involved in opening the investigation had reason to believe that Russia may have been connected to the Wikileaks disclosures that occurred earlier in July 2016, and were aware of information regarding Russia’s efforts to interfere with the 2016 U.S. elections. These officials, though, did not become aware of Steele’s election reporting until weeks later and we therefore determined that Steele’s reports played no role in the Crossfire Hurricane opening.

That’s funny, because the communist conspirator Andrew McCabe told congress that, “no surveillance warrant would have been sought from the FISC without the Steele dossier information.”

We did not identify any Department or FBI policy that applied to this decision [to open the massive spying operation against the Trump campaign] and therefore determined that the decision was a judgment call that Department and FBI policy leaves to the discretion of FBI officials. We also concluded that, under the AG Guidelines and the DIOG, the FBI had an authorized purpose when it opened Crossfire Hurricane to obtain information about, or protect against, a national security threat or federal crime, even though the investigation also had the potential to impact constitutionally protected activity.

US Attorney John Durham released a statement following the release of the FISA report disputing IG Horowitz’s findings and conclusions.

I have the utmost respect for the mission of the Office of Inspector General and the comprehensive work that went into the report prepared by Mr. Horowitz and his staff. However, our investigation is not limited to developing information from within component parts of the Justice Department. Our investigation has included developing information from other persons and entities, both in the U.S. and outside of the U.S. Based on the evidence collected to date, and while our investigation is ongoing, last month we advised the Inspector General that we do not agree with some of the report’s conclusions as to predication and how the FBI case was opened.

Attorney General Barr also had some issues with the IG’s whitewashing.

The Inspector General’s report now makes clear that the FBI launched an intrusive investigation of a U.S. presidential campaign on the thinnest of suspicions that, in my view, were insufficient to justify the steps taken.  It is also clear that, from its inception, the evidence produced by the investigation was consistently exculpatory.