Supposedly this is a picture of a tanker that was struck by an Iranian torpedo yesterday: 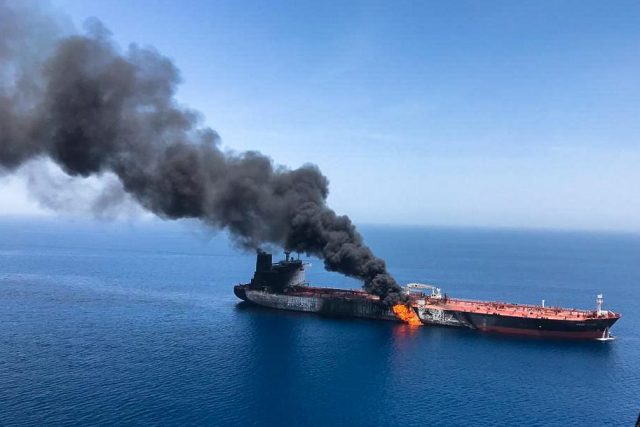 As a former sailor, I personally think that’s a load of bull.

Most modern torpedoes don’t run into the sides of ships at the waterline.  They are programmed to explode directly under the keel. When a torpedo explodes directly under a ship’s keel, it causes a massive cavity of water to form.  The ship then “falls” into this cavity, which causes the ship’s keel to crack under the ship’s own weight.  This typically leads to the ship splitting in half. The simple fact that tanker is still floating tells me this wasn’t a torpedo attack.

While it is possible that a torpedo could have been programmed to run at the waterline and be fused to explode on impact, this would be highly unusual in calm seas against an impossible to miss target like an oil tanker.

We know Iran has access to advanced torpedo weaponry.  Back in May of 2017, Newsweek reported Iran was spotted testing advanced torpedo technology all the way back in 2006.  They aren’t shooting WWII era torpedoes.

The Iranian projectile, called “Hoot,” is reportedly based off the Soviet-era Russian VA-111 Shkval, which is capable of traveling at more than 200 miles per hour or four times that of a conventional torpedo, according to The National Interest. Iran’s variant was first seen in a low-quality test video in 2006 and was seen again during a military exhibition held by the elite Islamic Revolutionary Guards Corps in 2015. Like the Soviet weapon its based off of, the Hoot was said to achieve these breakthrough speeds using a technique known as supercaptivation that vaporizes the water around the torpedo, according to security analysis group IHS Jane 360.

Iran denies doing this and I believe them.

Iran rescued dozens of sailors from oil tankers that were reportedly attacked in the Gulf of Oman off the UAE coast, according to IRNA. One of the vessels was allegedly targeted by a torpedo, reports said.

The rescue ship evacuated 44 crew members from the tankers in distress, bringing them to safety to the city of Jask in the southern Hormozgan Province, IRNA reported, citing an informed source.

They are also reporting:

Iran strongly rejected National Security Advisor John Bolton’s claims that it was “almost certainly” behind the May 12 attacks on four oil tankers in UAE waters, calling the unevidenced accusation “ridiculous.”

While Foreign Ministry spokesman Abbas Mousavi mocked the allegations against his country, he noted that it was unsurprising that Bolton would make them at a press conference in the United Arab Emirates, a country who has developed a rivalry with Iran.