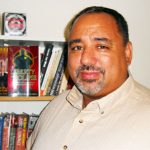 The movement for freedom lost an important player yesterday.  William Norman Grigg died, aged 54, apparently from an infection. William is survived by his wife Korrin and their six children.  William was the primary bread winner, so this loss is really going to hurt the family.  Any money you could donate to them would be greatly appreciated.  While rich in spirit, they never had much in the way of assets.

Grigg was one of my all-time favorite authors and activists.  I truly feel the work Grigg did was worthy of numerous Pulitzers.  Of course, the establishment would never recognize someone like Grigg for that honor.  He was a great defender of freedom, as well as a stalwart seeker of truth and justice.

No one wrote prose like Grigg.  I loved the fact that I could instantly recognize one of his articles without ever bothering to look at the byline. I can’t think of any other author that I could say that about.  His pieces were always compelling, in depth, and written with a kind of artistic flare that only Grigg could bring. Most of his work can be found at the Pro Libertate blog, which I’ve featured on my news feed since I first saw it nearly a decade ago.

This is truly a great loss.