They refactored the Sun Cell to use dual liquid silver metal injectors for the electrodes, which solved the problem of the reaction being so strong that it was blowing holes through solid tungsten electrodes in just a few seconds.

What’s pretty crazy is they are reporting that they can actually shut the power off to the electrodes and the EM pump; yet the reaction will continue in a self-sustaining manner. You can actually see this take place in the video.

BLP states, “It is predicted that with sufficient silver vapor pressure, the power will persist by a self-sustaining hydrino reaction. Moreover, as designed, when the cell is operated as a silver boiler, the EM pump power may be terminated as well such that the parasitic load is zero except for the power consumed in electrolysis of water to provide the hydrogen fuel. In fact, the power did persist at the same level for long duration after the ignition power was terminated (See sections of the run indicated by the ignition-off video captions).”

Here’s a look at the reactor: 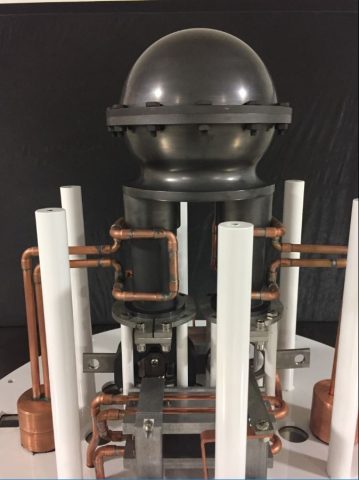 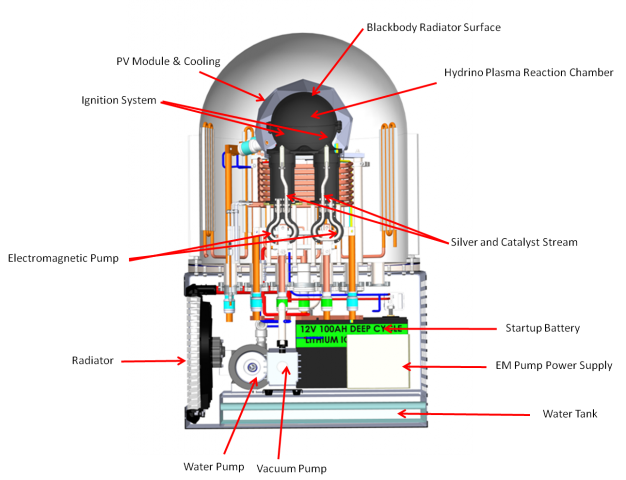 I just read through the latest BrLP presentation event notes and found their current planned development and production timeline. They are projecting the commercial units to produce 100 kW of power.

BrLP has contracted with Columbia Tech to have them do the prototype and manufacturing workups. CT’s Chief Technology Officer is projecting initial field testing of prototype units to take place in 6 months, with pilot commercial units available 6 months after initial field testing completes. Phase 1A design began on November 1st.

Masimo Semiconductor is responsible for creating the commercial photovoltaic converter comprising a denser receiver array of concentrator multijunction photovoltaic cells that will wrap around the black-body light source. Masimo’s Head of Business Development is projecting the photovoltaic array to be ready for the prototype field tests on time.

Looking at the slide notes from Masimo, they are projecting 15.5kW output for the first prototype, and 28.5kW for the second prototype.

So looking at the notes, Jan 13, 2017 is a big day because that’s the day the first geodesic Dense Receiver Array will be completed (gDRA). The gDRA is the photovoltaic dome that wraps around the black body light source. Once that’s done, we could see a self-sustaining prototype generator produce power for the first time not too long after that. So perhaps a fully working prototype will be wheeled out for a public demo sometime near the end of January or in February.

Video 1: Colin Bannon, Chief Technology Officer for British Telecommunications, discusses BT’s energy usage and their desire for a clean source of power. [BT is an absolutely massive telecom corporation, with a market cap of around 36 billion.  They are about half the size of Time Warner to put them in perspective.]

Video 3: Dr. Randell Mills gives a complete overview of how the SunCell works and the latest test data.

Video 4: Dr. Peter Jansson of Bucknell University speaks on the independent validation of the SunCell system.

Video 5: John DeCarlo of Columbia Tech discusses how their applied engineering team is working with BrLP on the prototype of the reactor assembly, as well as helping plan for mass production.

Video 6: Brad Siskavich of Masimo Semiconductor discusses their work on the photovoltaic cells that will produce power from the SunCell reactor.  This is a pretty interesting lecture that’s worth watching.  He’s projecting they shouldn’t have too much trouble obtaining a 100 kWs from the SunCell in the future, while their initial prototypes will produce around 10 to 30 kWs.