Dr. Mark Hyman has this to say about low fat diets,

“In a study published in the Journal of the American Medical Association (i) Dr. Ludwig correctly points out that careful review of all the studies on dietary fat and body fat — such as those done by Dr. Walter Willett of the Harvard School of Public Health — have shown that dietary fat is not a major determinant of body fat.

Let me repeat that. Dietary fat is not a major determinant of body fat.

The Women’s Health Initiative, which is the largest clinical trial of diet and body weight, found that 50,000 women on low-fat diets had no significant weight loss. Yet another study looked at people who followed four different diets for 12 months — and found no dramatic differences between those who followed low-fat, low-carb, and very- low-carb diets.

The question then is, why aren’t we seeing any significant effects or differences from these various diets? The main reason, Dr. Ludwig suggests, is that we are looking for answers in the wrong place.”

What this guy doesn’t tell you is that the Women’s Health Initiative had the goal of getting those women to reduce their fat intake to 20% of their daily caloric intake.  20% is still an enormous amount of fat. To put that in perspective, the average US male consumes 30% of his calories from fat.  The women in the study were only successful at reducing their fat intake to 29%, down from 38%.

Here’s an example of what a real low fat diet can do.  In this study, researchers took a group of people who were nearly dead from heart disease and reversed their condition.  The study notes that, “In the experimental group, fat intake decreased from approximately 30% to 8.5%”  So the people in this study initially got their heart disease by eating a diet that the women in the first study reduced their fat intake to obtain!

So what happened to these participants’ weight?  They dropped 11 kilograms on average after a year.  That’s about 24 pounds.  All of their heart disease and angina was halted or reversed. Their arteries opened back up and their angina dissipated.  Studies like this prove that heart disease is a reversible condition with a low fat diet.

Of course, Dr. Hyman isn’t the only jerk out there bending the truth to fit some kind of fucked up satanic agenda.  I’m not sure why there are so many highly intelligent doctors out there who feel the need to mislead people to their deaths, but it seems to be a pretty common theme.

“If you are seeking to lose weight and optimize your health, foods like bread, rice and pasta should comprise very low percentages of your diet. Virtually anyone who bought into these high-carb, low-fat dietary recommendations has likely struggled with their weight and health, wondering what they’re doing wrong.

The problem is that overeating carbohydrates can prevent a higher percentage of fats from being used for energy, and lead to an increase in fat production and storage. It also raises your insulin levels, which in short order can cause insulin resistance, followed by diabetes. Insulin resistance is also at the heart of virtually every chronic disease known to modern man.”

Where should I even start with this load of BS?  As noted in the previous study, a real low fat high carb diet is capable of reversing heart disease, lowering blood sugar levels and causing substantial weight loss.   While it is true that carbs raise your insulin levels after eating, what Dr. Mercola fails to tell you is that fats do so as well!  To quote the researchers at the Joslin Diabetes Research Center,”Research has shown that dietary fat and free fatty acids (FFAs) impair insulin sensitivity and increase glucose production.”    The article goes on to say, “These findings highlight the limitations of basing mealtime insulin dosing for type 1 diabetes solely on carbohydrate intake… We need to consider fat as well as carbohydrates in insulin dosing calculations as well as in nutritional recommendations.”

If pasta makes you fat, it’s worth questioning why only 1 in 10 Italians are obese compared to 30% in America.  They eat a far higher percentage of their diet as carbs than we do.  In fact, those places in the world where people consume a completely carbohydrate based diet, obesity and metabolic disease are virtually nonexistent.

Diabetes is tightly correlated to body fat.  Diabetes is caused by fats in the muscle tissue that lead to insulin resistance.  The body uses insulin to shove fat into cells.  Insulin resistance is one mechanism the body uses to prevent excess fat from accumulating.  When people become overweight, their bodies can develop a resistance to insulin which limits their ability to store additional fat.    You can listen to Dr. Michael Greger explain this in more detail here.  It’s not the carbs that are the problem, it’s the meat.

Here’s a chart showing the insulin index of foods, taken from this study.  This is the insulin response the body provides in relation to the amount of glucose being consumed.  As you can see, beef has very little glucose, but produces an absolutely enormous insulin response in proportion to that glucose. 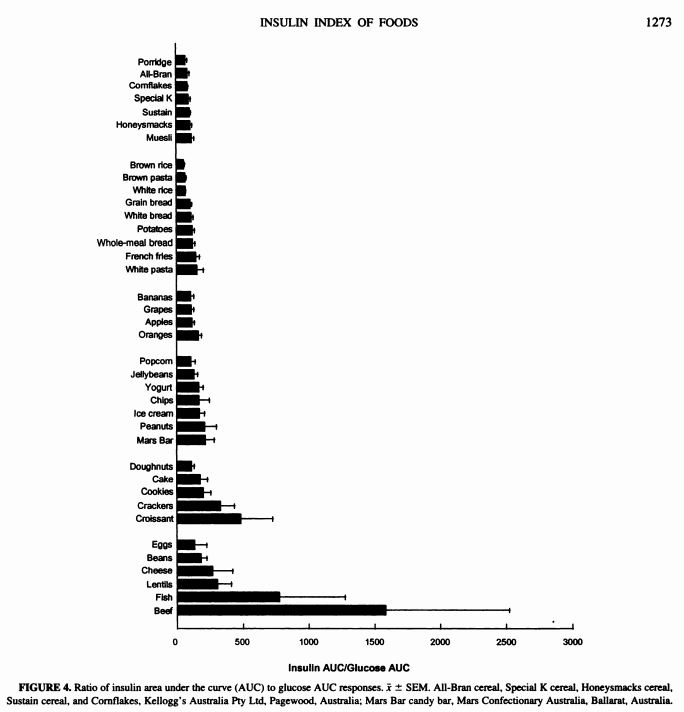 Since high carb low fat foods don’t have any fat, it doesn’t matter if they spike insulin because the lack of fat means the body will not develop a resistance to the insulin.  In fact, insulin is supposed to spike when high carb foods are consumed because insulin is also used by the body to move glucose into cells.  Glucose is what your cells use as fuel!  A massive insulin spike from carbs is what allows vegan athletes to set so many world records.

The super deadly combo is when people mix high carb foods with animal based foods.  When this mix is ingested, the body produces a large insulin spike from the high carb foods, which is then potentiated to absolutely massive levels by the meat.  Then the body takes all that insulin and uses it to ram every last drop of fat from the high fat foods into fat cells, leading to either morbid obesity or insulin resistance (type 2 diabetes.)  This chart, taken from this study, shows glucose and insulin responses when starches and meats are consumed alone or in combination with each other: 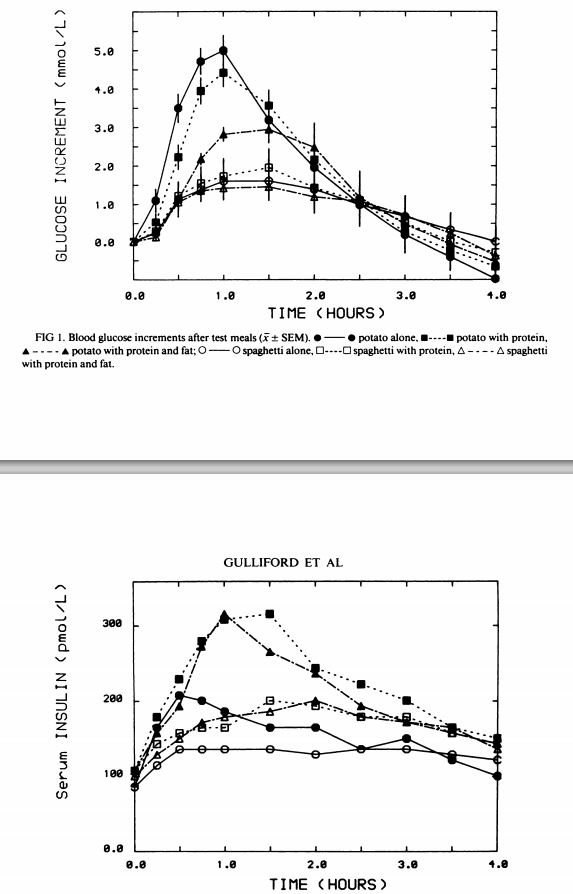 As we can see, the addition of meat blasts the insulin response to DOUBLE the levels of just the carbs by themselves.

Research proves time after time after time that when a real low fat diet is consumed (ie. less than 10% of caloric intake as fat), people get lean, reverse their diabetes and often times reverse other supposedly “incurable” chronic diseases.

The fat you eat is the fat you wear.  Don’t believe the lies.

F'ed Up Sh** That Went Down This Week

I Know Why The US Is Being Destroyed From The Inside Out. War Is Coming.

Inside Information On Uvalde Shooting