Have you ever heard the term “spacetime” thrown around in various science articles around the web?  Just what exactly is “spacetime” and how does it relate to standard theories about space? I think Wiki manages a rather good description of this odd substance, so let’s start there.  Wiki defines spacetime as:

spacetime is any mathematical model that combines space and time into a single interwoven continuum. The spacetime of our universe is usually interpreted from a Euclidean space perspective, which regards space as consisting of three dimensions, and time as consisting of one dimension, the ‘fourth dimension’. By combining space and time into a single manifold called Minkowski space, physicists have significantly simplified a large number of physical theories, as well as described in a more uniform way the workings of the universe at both the supergalactic and subatomic levels…In cosmology, the concept of spacetime combines space and time to a single abstract universe.

From this summary we get the clear picture that spacetime is a purely mathematical construct used to build mathematical models.  In physical reality, there is no such thing as a substance called spacetime.  This important fact is often overlooked when scientific theories are presented to the public.

The spacetime concept merely defines a spatial coordinate and event system. The obtuse hieroglyphics often found in mathematical models which invoke this abstract mathematical universe are all related to defining where things are in relation to one another, as well as defining how objects move, their velocity, and the timing of events.

What often gets lost in the process of all this modeling is the fact that space itself has no physical properties that act upon matter. Often theories of bending space are presented as scientific fact, when in reality there is no such thing as bending space.  What scientists are really presenting are models of bending spacetime, which is a mathematical abstraction.

Reification (also known as concretism, or the fallacy of misplaced concreteness) is a fallacy of ambiguity, when an abstraction (abstract belief or hypothetical construct) is treated as if it were a concrete, real event, or physical entity. In other words, it is the error of treating as a concrete thing, something which is not concrete, but merely an idea.

Another common manifestation is the confusion of a model with reality. Mathematical or simulation models may help understand a system or situation but real life will differ from the model (e.g. ‘the map is not the territory’).

One of the most common reified models the general public may be familiar with looks something like this: 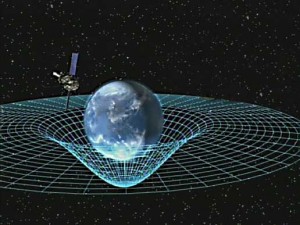 In reality, there is no such thing as bending space.  Space, which is nothing, has no physical properties that can act upon matter.

If you were to ask a mathematician if spacetime has real physical properties that can act upon matter, they would probably stare at you with a blank face.  This is because the question forces them to directly face a form of cognitive dissonance they’ve been carrying around with them since grad school.

They instinctively know the answer to that question is no.  They are well aware that spacetime is nothing more than a mathematical concept.  However, many of their theories depend on this mathematical abstraction actually being a real entity that is capable of acting upon matter.

Now suddenly, the LIGO team claims to have discovered gravitational waves.  As the NYT article points out, different scientists made the same claim back in 1969, and again in 1974, and again in 2014.  Each time the claims were later overturned.  Supposedly the event they detected this time was “50 times greater than the output of all the stars in the universe combined.”  – Does that sound plausible to you?  Recently scientists concluded that there are over a trillion galaxies in the observable universe, each containing an average of 100 billion stars.

All that power condensed into a tiny point in space, but we couldn’t see it because “black holes.”  Yeah, and I have a bridge in Alaska I’d like to sell you.  While I have no doubt that the LIGO team detected some signal in their interferometers, just what exactly caused that signal is entirely up for debate. Dr. Hilton Ratcliffe provides an excellent skeptical overview of the results here, as does physicist Stephen Crothers here.  Thornhill also provides some excellent skepticism here:

Defining gravity as bending spacetime creates other intractable problems. For example, quantum mechanics, which deals with objects on the atomic scale, has absolutely no working theory of gravity. In other words, scientists have no idea what actually causes gravity.

Supposedly a mysterious “massless” particle called a graviton is theorized to be the gravitational force carrier at the atomic level.  The Fermi National Accelerator Laboratory defines the graviton as being, “entirely theoretical constructs that delicately walk the knife-edge precipice between the domains of scientific respectability and the shady world of hand waving.”

A great deal of time and effort has gone into coming up with a theory of gravity that can define it at the atomic level, as well as at the macro level.  Creating such a theory would “unify” quantum mechanics and General Relativity.  It should be obvious this is impossible because General Relativity treats gravity as if it is a function of bending spacetime (a mathematical abstraction), while atomic level forces must be related to real physical particles or force carriers.  This leaves scientists trying to tie two completely different mathematical models together, both of which fundamentally have no basis in the real material world.  The attempt to unify the two has been going on for well over 100 years.

I could go on describing more problems that arise from reification until the cows come home, but I think you get the picture.  So let’s summarize.  Space does not bend.  No scientist has ever put forth a theory of bending space.  The only theories that have been put forth involve bending spacetime, which is merely a mathematical abstraction.  No black hole event horizon has ever been directly observed, nor will it ever, because black holes are conveniently black, making them invisible against the backdrop of space.

The mathematical abstractions were initially created to describe the observed movement of real objects, without defining what actually imparts force upon them.  This situation is similar to Newton’s laws of gravitation, which describe the action of gravity, without offering a hypothesis as to what causes gravity.  Over time, scientists have taken to assuming that bending spacetime is the actual cause of gravity, while forgetting that spacetime is merely a descriptor, not an actual causal agent that can do real work.

For those of you who think this is a black hole: 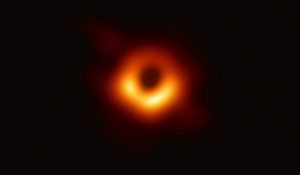 I’ll bet a million dollars that with a high enough resolution telescope that “black hole” will look more like this: 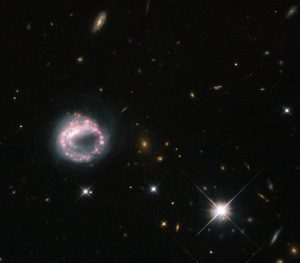 Rings are a ubiquitous feature of space.  Ring systems come in all sizes, from planetary rings to nebular rings to rings the size of entire galaxies and beyond.  Whatever is causing this particular ring is probably the same electromagnetic force that’s causing all the other similar rings as well.  Black holes do not exist, and are in fact impossible even according to Einstein’s own theories.

Special Relativity absolutely forbids infinite point-mass particles from existing.  Black hole math is an artifact of an error made by David Hilbert in his derivation of the field equations.  Black holes, as mathematical constructs, require division by zero in their models.  They don’t exist.