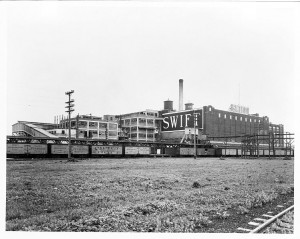 As a person who advocates for the elimination of the coercively funded state and the supremacy of property rights, I often find myself involved in arguments over the need for inspection and regulation of food and drug products.  Typically one of the first things I’m told to read is Upton Sinclair’s muckraking novel “The Jungle,” which supposedly exposes the terrible conditions of food processing plants prior to the imposition of federal inspections.  In this article, I will explain why the entire novel is a pure work of fiction.

The truth of the matter is that the large corporate meat packers had been lobbying for federal inspection mandates decades prior to Sinclair’s novel.  There were several reasons why the large producers, like Cudahy, Armour and Swift, wanted federally mandated inspections.  The major reasons were:

1.  Government inspections added a large fixed operating cost to producers due to the administrative overhead.   While this may sound counter-intuitive, this effectively serves as a large barrier to entry into the meat packing business.  The smaller packers do not have the economy of scale to be able to absorb this fixed cost so they end up being run out of business by the large producers because the small guys necessarily need to raise the price of their meat higher to account for the additional fixed compliance costs.

2.  The Europeans at the time had begun barring meat imports to protect their own meat producers profits under the guise of  preventing “diseased meat” from being imported.  So the Europeans were requiring that imported meats undergo an inspection process.   Thus, the US meat packers had to have their meat inspected anyways by private inspectors if they wanted to be able to export their meat.  By lobbying the US government to inspect their meat, the US large meat packers could pass some of the cost of this inspection process, that had to happen anyways, on to the tax payers.  This served to socialize some of the inspection costs for the large US meat exporters, while simultaneously driving up the fixed compliance costs for smaller producers.

3.  The inspection seal effectively serves as a fantastic marketing gimmick.  It provides a false sense of security to US consumers and legitimizes the meat processed as being approved by the US government.  Jonathan Ogden Armour, President of Armour and Company, one of the largest meat packing corporations in America, wrote the following in a March 1906 Saturday Evening Post article:

It may surprise you, but Sinclair actually called the proposed regulation scheme a racket.[1]  Sinclair was more concerned about the working conditions in the plants, not the quality of the food.  Since Sinclair was a socialist, his goal was to nationalize the whole market, not regulate it.  However, his fictional account of the meat packing industry was used by the meat packing industry itself to have the regulation scheme they had been lobbying for finally rammed through.

“The Jungle” is a pure work of fiction.  It has absolutely no basis in reality.  A 1906 report by the Bureau of Animal Industry refuted Sinclair’s severest allegations, characterizing them as “intentionally misleading and false,” “willful and deliberate misrepresentations of fact,” and “utter absurdity.”  Quoting Mr. Crumpacker on Sinclair’s allegations of diseased meats, “the chief inspector said there was not a single animal that went into the slaughterhouses that was not inspected before it went on foot; and if one was diseased, had a lumpy jaw, or appeared to be out of condition, he was separated, and then a skilled veterinarian made a thorough examination of that animal after the rest had been passed; and then they had inspection on the inside.”

A little bit of common sense also works to refute the notion that federally mandate inspections can somehow keep food safer.  For starters, market forces will quickly drive meat packers out of business if they attempt to sell diseased meats!  Would you buy meat from a company that had a reputation for making people sick?  Of course not!  Food producers have an extremely strong market based incentive to ensure they only sell high quality food.

Further, a quick look at current food poisoning statistics shows that even with mandated inspections, problem foods still end up making the public sick.  This isn’t a problem that inspections can solve, it is something that the market has to come up with solutions for.  In fact, it could be argued that mandated inspections may actually contribute to the problem, because inspections provide a legal defense against injury lawsuits.  Private food producers may take more steps to solve the problem of food borne illnesses if they didn’t have the inspection defense to fall back on.

In summary, inspections don’t make you any safer, but they do drive up the cost of your food and serve to cartelize food production markets by driving up fixed costs.  Eliminating the FDA would allow smaller producers to once again enter the market, potentially saving people billions per year in food costs, while at the same time potentially making our food safer due to market competition.

Here’s a great example of how modern day regulations are used to drive small farmers out of business.  There are MANY more case reports similar to this one, just search YouTube: